“I once had a chat with a janitor in front of the house. … I asked his opinion: ‘How should a composer write his music?’ He looked at me. ‘Ah, what a question. I think he has to love each single sound.’ … I never heard anything like that. This understanding opens up a whole new world. How to reach that understanding …? That’s probably a secret which requires much work.”  – Arvo Pärt (from documentary Arvo Pärt: 24 Preludes for a Fugue, episode: Janitor) 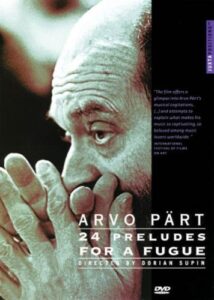 I discovered the work of the Estonian composer Arvo Pärt in late 2007. At that time, I overheard a conversation in which there was a suggestion that his music somehow represented a certain sort of beauty that I might be drawn to. In a local bookstore, I had the opportunity to listen to the beginning of the cd Da pacem and was immediately hooked. Over the years, I obtained as many of his cds as I could. I found in many of his works a transcendent beauty that I thought could only be found in the works of J.S. Bach. It wasn’t until more recently that I looked into what made his particular compositions so distinctive. This is when I learned of his tintinnabuli style (Latin for bells) which he founded and developed in the 1970s, after a self-exile from the music world, trying to free himself from the avant-garde style he was working in earlier. His new style came from meditating on several medieval and Renaissance sacred works, especially Gregorian chant. This inspiration from more ancient sacred music speaks to what is emblematic of much of his work in that it arises from his deep Orthodox faith. Even so, his pieces have been embraced and found a source of inspiration by both religious and non-religious persons alike.

This brings us to the dvd under review. This documentary consists of 24 vignettes in which we see Pärt working with musicians and conductors rehearsing his pieces, working on developing or editing new pieces, sharing recollections of important moments in his life in relationship to music. We also see little moments of him and his wife, Nora, as they go out and about in their local village. These vignettes not only give a sense of Pärt’s good nature, generosity, and religious devotion, but also the loving and close-knit relationship with his wife, as well as his intense love for music. A particularly interesting episode, with the title AUFTAKT, is one in which he explains the elements of his work Für Alina, the first work designed around his newly formed around his tintinnabuli style, to a group of interested onlookers. Here we get to see Pärt explain the underlying form by which this and other compositions in this style come to be. In particular, in his explanation of how individual notes are to come together, he comments that there is “[a] need to concentrate on each sound, so that every blade of grass would be as important as a flower.” Here he is clearly resonating with the answer to the question he posed to the janitor, as quoted at the top. Pärt consistently holds that each individual note, and the silences between them, must all come together in harmony, while letting each of them shine in each of their individuality and proper moment. It is thus not surprising that his style has been often termed as holy minimalism.

This is a wonderful documentary in its intimate portrayal of Arvo Pärt as he seeks to perfect his craft as a composer. He gives an honest account of the challenges he faced while developing as a composer. He is quite open, though, to seeing his works of compositions as arising from a place of mystery, but only after intense work, experimentation, and contemplation is done. At the end of the same episode, AUFTAKT, Pärt remarks “I guess the composer is in the same position, before he starts writing. He must have the knowledge or perception of what is coming when the hand [of the conductor] goes down. What is the first note? And what’s the second one? The first step is everything, decisive. This is a complicated story. I don’t quite understand it myself. But I have an idea of what I want to say. I’m always looking for it. Sometimes it comes easily, sometimes it doesn’t come at all. Every time I feel I have to start from scratch.”