I want to begin exploring, or perhaps recovering, a way of understanding the discipline of mathematics as one that integrally involves a perspective of beauty, not a “beauty cold and austere, like that of a sculpture,” (Bertrand Russell) but a beauty that irradiates from the form of anything that can be understood as having being. This view that I will articulate will be one which sees the development of any subject-matter as a dynamic interplay of human understanding and the rendering and communication of knowledge. I will focus, as my case study, on what is considered the earliest of paradigmatic works of mathematics: Euclid’s Elements. As we will see, I consider this as an exemplary work for demonstrating how form and beauty underlie mathematical reasoning.

The Elements is a work that was born out of the inception and developments of geometry within ancient Greek culture and is considered an important root to modern mathematics. An important predecessor to Euclid is Pythagoras of Samos (c. 570 – c. 495 BC). He and his followers are credited with gathering from the Mediterranean region recorded measurements from land surveys and architectural developments and uncovering from them general patterns. These became part of the subject-matter of geometry (geometry is derived from the Greek geo (earth) and metron (measurement)). The accumulation and organization of these discoveries found their ultimate expression by Euclid of Alexandria (fl. 300 BC) in his Elements. This work became the gold standard for the development and rendering of mathematics, well into the 19thcentury. In fact, one could take David Hilbert’s Grundlagen de Geometrie as the culmination of the project of providing a rigorous axiomatization plane geometry (which further motivated Bertrand Russell and Alfred North Whitehead in their project to provide a rigorous axiomatization of all of mathematics in their Principia Mathematica). But, in writing the Elements, did Euclid intend to develop a view of geometry founded strictly upon a system of axioms? By asking this question, I do not intend a historical analysis on ancient Greek thought. Rather, I would like to argue that Euclid need not be taken as giving a formalized account of plane geometry. Instead, I want to take the perspective that Euclid arrives at a rendering of the subject-matter of plane geometry from a meditation on the forms that underlie geometric reasoning as presented in the world and first received through the senses. In making the case for this, I will seek to portray the orderly way that Euclid renders his work as one that begins by stipulating the most simple of forms, as found in the opening Definitions, as abstractions of items understood by sensory experience of things encountered in the world and framed by means of quantitative notions. I will also seek to distinguish between the formalist approach of axiomatizing and a view of Euclid as rendering first principles for the formal causes. In particular, his Postulates provide such principles for the formal cause of existence and constructions of things, understood as abstract in accord with basic definitions. Also, his Common Notions provide first principles for the formal cause of relations between things understood as quantified. In taking this perspective, I am endeavoring to draw a portrait of mathematics as part of the human journey for understanding the nature of order in the world.

The Postulates of Euclid’s Elements pertain to items (points, lines, circles, angles) that are given their understanding in the opening section of Book I, the Definitions. In the modernist demand for rigor, these Definitions, while having important ideas, are vague or, at best, imprecise. From a Hilbert-esque perspective, the important starting point is the stipulation of postulates (or axioms) stated as conditionals (“if (conditions) then (conclusion)” statements) in which the conditioned (those things that the conditions and the conclusions pertain to) are undefined but are determed a priori through the postulated conditionals. This is the approach of formalism. The resulting system is constructed through subsequent logical deductions. The system is then “applied” when a model can be erected in which the conditioned can be consistently given “concrete” designations in such a way that the conditions and the conditional hold true. Historically, this approach left Euclid’s Postulate V as a questionable part of the axioms (more about this later). I want to suggest that, seen in a certain light, the Definitions of Euclid’s Elements is a better starting point and justifies his stated five Postulates as a proper whole.

I want to begin by examining an object common to our everyday experience. 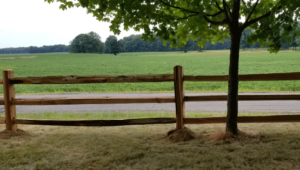 This common type fence, perhaps serving as a boundary to some farm land, can serve to help us understand some aspects of how Euclid opens his Elements with the Definitions. To make the move, though, from the sense experience of the fence to the geometric figures that Euclid takes as fundamental, I want to examine the mode of human understanding that moves from the former to the latter.

In concentrating our attention upon the fence, let us single out certain particular features which will be deemed as important for our geometric lexicon. To that end, let us consider the posts and the rails of the fence. In selecting only those features which are geometric, we must remove from our attention those aspects which do not contribute to that understanding, such as the time of day, the location, as well as its texture, smell, and brownish color. We also remove from our attention the thickness of the posts and rails. My aim, at this point, is to arrive at, from our sensible perception of the fence, some of the initial notions Euclid gives in his Definitions at the start of the Elements. To that end, I want to concentrate on the process by which we move from the sensible experience of the fence to an understanding of the geometric forms that serve as part of the formation of the fence.

First, I want to highlight, following Aquinas (who is modifying Aristotle), our movement from our sensory experience to a cognitive understanding of a thing, such as the fence. Such an understanding comes in a hierarchical ordering, that is those features that we may attribute to a thing are understood in an order of dependency. To wit

From this order of dependencies, I may understand a thing, like the fence, by concentrate my attention to particular attributes of the thing. Furthermore, I will understand those attributes as they implicitly or explicitly depend upon those attributes in accordance with the hierarchy. This way of understanding a thing, by singling out and focusing intentionally on particular attributes, is called abstraction. This is characterized, according to Aquinas, as follows[ii]: “if one thing does not depend on another with regard to what constitutes the intelligibility of the nature, then the intellect can abstract the one from the other so as to know it without the other … this is true if they are united in reality … as form is united to matter and accident to subject.” He continues: “Through the operation by which it composes and divides, it distinguishes one thing from another by understanding what one is without the other.” This is properly called separation, for example by understanding the fence without the tree, but “through the operation, however,  by which it understands what a thing is, it distinguishes one thing from another by knowing what one is without knowing anything of the other, either that it is united to it or separated from it; it is called abstraction when the things, one of which is known without the other, are one in reality.” For example, by abstraction we may understand the fence in terms that don’t include the time of day or its particular location, such as that it is brown, has a rough texture, and it is shorter than the tree.

Continuing with Aquinas: “Now, a form may be abstracted from matter if the essential nature of the form does not depend on that particular kind of matter; but the intellect cannot abstract form from the kind of matter upon which the form depends according to its essential nature. Consequently, because all accidents are related to substance as form to matter, and because it is the nature of every accident to depend upon substance, no accidental form can be separated by substance.” It may now be observed that those accidents that can be attributed to the fence in accord with our senses are those attributes that begin with time and place, but the same accidents are attributed to substance in the order beginning with quantity. Such accidents that are attributable to the fence and are made known through the senses are due to the substratum of the fence that is its sensible matter. These will be what can be predicated of the fence in terms of time, place, qualities, etc.

Now, as Aquinas further comments: “quantity can be thought of in substance before the other sensible qualities (because of which matter is called sensible) are considered in it. Quantity, then, according to its essential nature does not depend upon sensible matter but only upon intelligible matter. For, after accidents have been abstracted, substance is intelligible to the intellect, because it is beyond the sense powers to comprehend substance.” What remains are not understood through the senses, but only that which is made intelligible to the intellect through the imagination. This is the material part of the fence that is understood by the intellect. This is the intelligible matter of the fence, understood as “substance as subject to quantity.” Moreover, from order of attribution, it can be understood why quantity is present universally to a greater degree than what is perceived by the senses, as it is understood by the intellect prior to any of the sensible features a thing possesses.

Let’s take a moment and say a little more about quantity and its relationship to matter. Without getting into the deep complexities and structure of a contemporary understanding of quantity (which I will address at another time), let us adopt a simple notion of a quantity as (1) that which can be either increased or diminished (2) that which can be calculated and (3) that by which things are distinguished.  Now, quantities can be understood intrinsically as quantity per se, or as things quantified or as quantitative being, whereby they are understood to bear a quantity. Cases of this latter type of quantity includes multitudes (numbering collections) or a magnitude (measurements of continuums). Thus, in taking quantity in this way, it is not an attribute of substance that is comprehended by the senses first. As such, intelligible matter is then the proper place to understand how things are quantified.

In the next installment,

I will focus on how the particular mode of human understanding called abstraction leads us to understand from the form of the fence the pertinent definitions and relations that Euclid gives at the start of his Elements.

[i] Here I follow Aquinas’s Ontology of the Material World by Jeffrey Brower (Oxford University Press) for an account of matter, form, substance, subject, and accident.

[ii] Here I follow Aquinas’s Commentary on Boethius’s De Trinitae, particularly Question 5, Article 3, as translated by A. Maurer in The Division and Methods of the Sciences by Saint Thomas Aquinas, for an account of mathematics in terms of abstraction, intelligible matter, and quantity.