In the previous installment

(upon which this part depends), I gave what I feel is the correct beginning in how to arrive at and understand basic notions in mathematics. In doing so, I attempted to re-appropriate medieval concepts of matter, form, and abstraction in order to understand what constitutes the objects and subject-matter of mathematics. In particular, I emphasized the role quantity played and in what way things may be quantified. To that end, quantitative being became understood as substance as subject to quantity. I began here with this understanding and examine how the basic items of Euclid’s Elements are arrived at.

Returning to the subject-matter of mathematics, Aquinas defines it to be about abstract objects that arise by abstraction of those accidents in things not comprehensible first to the senses. This subject-matter, therefore, concerns itself with substance as subject to quantity. Thus, the understanding of such abstract objects is through the inhering substantial form of the thing being united to intelligible matter that serves as the underlying substratum of the thing.   As such, such objects do not depend upon sensible qualities and the like and so possess a universal nature which enables their understanding to be purely in terms of an engagement of the intellect. They, thus, arise by abstraction from other things perceived by the senses when the substance of such things possesses similar forms inhering in them. The primary condition for being similar is one of accidental change in the intelligible matter, and hence change in quantity, but not one of substantial change. Mathematics therefore “treats of quantities and properties of quantities, such as figures and the like,” as well as “formal determinations and relations of quantity.”

With this initial view of mathematics in mind, let us now return to examining Euclid’s Elements. Returning to a fence that is perceived by the senses

If we begin paying close attention to the timber that make up the posts (vertical timber) and the rails (horizontal timber) we may note that they are the same in every way except possibly length. Abstracting from the timber the features that just constitute the length, we may, in our imagination, just form the image that which just has length alone. Thus, we may remove from our sensory perception any other feature (e.g. color, width, roundness) and keep in our imagination what is infinitely thin having length alone. Such an image fits what Euclid gives in his Definitions as

A line is a length without breadth.

(which is referred to as a line segment today). Returning again to our perception of the fence, we see that the posts and the rails are connected in order to form the fence, but at the place where they connect, the same mode of abstraction produces an image which has no length (or breadth) which Euclid frames as

A point is that of which there is no part.

And the extremities of a line are points.

Now, the notion of a line in abstraction only depends on the quantity of length and, hence, can arise by abstraction from a thing perceived, for example, from a copper wire 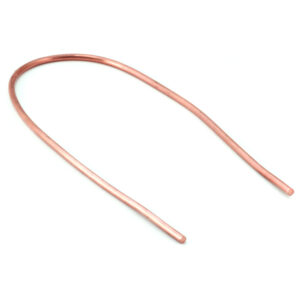 To draw a distinction between a line abstracted from the timber of the fence and the copper wire, let us abstract further relations between the posts and the rails found within the wooden fences. In particular, on a given level of the fence, the rails proceed along, connected at the posts, to form an extended line which appears similar to any given rail. But how are they similar? Taking other accidental features of the fence into account, we may note that as the given posts have the same length, their heights with respect to, say, the ground remain the same. Furthermore, this is also true between two such series of rails, as at each post, they are spaced apart at the same equal length. We thus may understand the lines as abstracted from the posts and rails to be the following special type (a la Euclid):

A straight-line is (any) one which lies evenly with points on itself.

In coming to the definition of a straight-line, we noted that as a type of line it possessed two particular properties. First, we noticed the feature of the fence that rails can be lined up through posts so that, under abstraction, the line is determined by its points at the extremes and the length of the line can be further extended while remaining straight. That is

Let it have been postulated to draw a straight-line from any point to any point.

(This is Euclid’s Postulate I and II.) These are not definitions but are first principles to being a straight-line in that (1) they hold true whenever a thing is understood to be a straight-line in its form by abstraction and (2) they are understood as self-evident and in no need of demonstration through prior known or demonstrated principles. The two principles stated above begin Euclid’s five postulates stated at the beginning of the Elements and serves to ground the reasoning of the existence and construction of, in this case, straight-lines without reference to things in terms of their sensible matter.  This movement from specifying definitions and their first principles through abstraction from things perceived through the senses to strictly reasoning from the definitions and those first principles chosen as postulates we will understand as formal reasoning or formalization. Such reasoning still pertains to matter as intelligible and so receives its definition and first principles from its inhering form and pertains to a thing in reality insofar as that thing can be understood in the same way through its inhering form by abstraction.

We can take the images we receive from our perception of the fences a little further in a holistic manner by comprehending the various series of rails in relationship to each other through the posts. Here we may abstract from this perception a quantitative relationship between vertical and horizontal lines defined by Euclid as follows:

[A] plane angle is the inclination of the lines to one another, when two lines in a plane meet one another, and are not lying in a straight-line.

And when the lines containing the angle are straight then the angle is called rectilinear.

And when a straight-line stood upon (another) straight-line makes adjacent angles (which are) equal to one another, each of the equal angles is a right-angle, and the former straight-line is called a perpendicular to that upon which it stands.

All right-angles are equal to one another.

I note, at this point, that Euclid will implicitly evoke a postulate that is stronger than this stated one in an early proposition that will apply to arbitrary angles. I will examine this postulate in the context of looking at the proof of this particular proposition in a later part to this series. 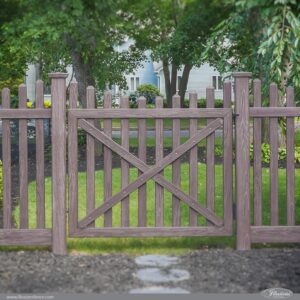 Here the form of the fence gate can be understood by abstraction to share many of the straight-line features in the previous fences, but it also includes wooden slats that don’t form right angles with the vertical posts. As abstracted straight-lines, they do form

an acute angle (is) one less than a right-angle.

Carrying our observations further, we see that top-left to bottom-right diagonal slat meets both the top rail (on the left) and the bottom rail (on the right). Now, by abstraction, the straight-lines formed from the left post, bottom rail, and top-left to bottom-right slat of the gate together give two angles on the left which together combine as a quantity that is less than the quantity of two right angles taken together. This observation should hold universally in terms of configurations of straight-lines, for which Euclid does postulate (Euclid’s Postulate V) as follows

Here we have arrived at a first principle regarding straight-lines that is abstracted from the fence gate which is discerned from the form of the gate seen as a whole. In this manner, what is abstracted are the straight-line parts of the gate together with the relationships between those parts, understood quantitatively. Henceforth, I will refer to any relationship that occur between parts due to the form of the whole that they belong to as a proportio, or being in proportio to (here I use the Latin to allow for broader usage understood and to avoid confusion with the word “proportion” (often taken to refer to strictly numerical relations)). Such occurrences of proportio come in types. In the case of Euclid’s Postulate V, we have a proportio of relata (two straight-lines meeting at a point) and a proportio of quantity (two angles being less than two right angles).

In the last instalment,